Deep breath now.....
Hallo world!
It's been a long time, far too long.
I am coming up for air and thought maybe it's time to live a little again (albeit short).

Here's a video I made of what we do at our Beagle Scenting Club.  Keeps the little critters happy, fit and living for each Sunday.

We are on sabbatical leave...

If you have been wondering why we have been so silent for the past few months, it is because we are on sabbatical leave from the doggie world for a while.  The nasty big business world is eating up every hour and while it pays the dog food bills, it's not nearly as much fun as the dog world.
But we will be back....
Posted by MA Beagle at 3:26 PM 1 comment: 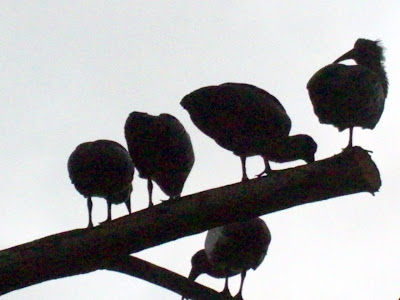 I have been waiting a long time to get this shot. Finally, after six long months, a happy ending for the Hadeda family in my garden.
You may recall one of my earlier blogs in which I lamented the fact that for six years the Hadedas have returned every October to nest in my trees. It was rare for more than one or two chicks to survive. Last year, all of the chicks died.

However, I was amazed when the parents immediately began building another nest. By the end of January, three little heads were peeping out of their precarious nest.
Oh dear, I thought. How many of these chicks will survive, especially since we were entering the very hot and rainy part of our summer season?

Then another disaster struck. My trees had to be cut back for safety reasons without delay. The Hadeda nest was now in serious peril. What to do? I fretted and worried and finally consulted Free Me, a bird rescue centre. Their advice: relocate the nest so the parents can continue to look after them. Well, Operation Relocation was complicated to say the least. 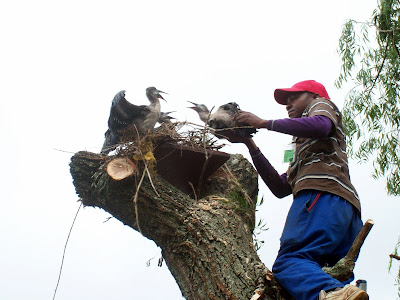 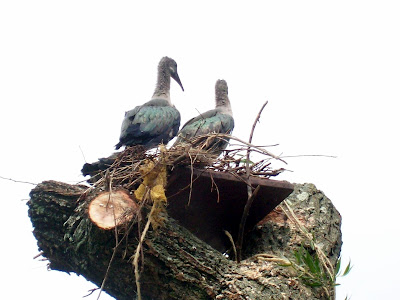 I was very lucky because I had a sympathetic tree doctor who was prepared to go the extra mile and help with the relocation. Not an easy task as the surrounding trees had to be cut first using ropes and pulleys to lower the branches to ensure no damage to the surrounding properties. Then a suitable site was chosen for the new location, the careful removal and replacement of the chicks (and their nest) into the tree fork that had been created for them. Finally the cutting of the last branch which was their old home, leaving my trees looking very bare. 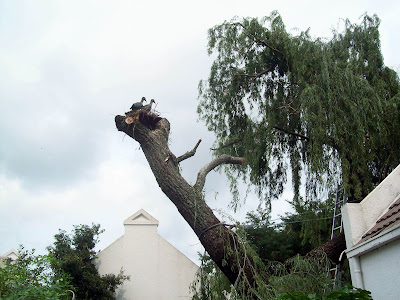 My biggest concern was the lack of shade and shelter from the elements (we tried to put large leaves over the nest but these did not stay in place long).
There were thunder storms and lightning almost daily with temperatures soaring up to 30C. Nevertheless, each morning three chicks still peered down at me.

The strongest, Chick No 1, left the nest first (accidentally or purposefully) and landed on the ground. But it was not strong enough to fly back to the nest. In the second week, it was Chick No 2 who made the big leap and actually flew to an adjoining tree. This inspired Chick No 1, to make a vertical flight up to the tree. Last of all to spread its wings, was the runt of the litter, Chick No 3. The parents' task is far from over as they have to teach the chicks to forage for food by themselves. 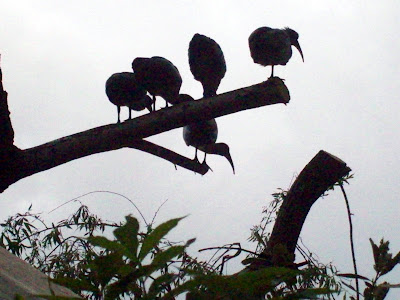 I got this rare picture of them all together yesterday evening. They usually roost on different branches, especially the parents who need to escape the continual harassment by their chicks for food.
Hats off to these Hadeda parents who have been working hard for over six months to finally produce a family.
So nice to have a happy ending for once.
Posted by MA Beagle at 12:27 PM No comments:

I am still reeling from our crash start to the new year.
February seems to be the month for major canine surgery. Last year half of Jamie's toe needed to be amputated. This year was no different.

Two weeks after returning home, Jamie stopped eating and looked off colour. We went to the vet but they were unable to make an absolute diagnosis and advised me to observe him overnight.
It was the worst night both Jamie and I have had for a long time. His condition deteriorated as he began vomiting, cramping, trembling and acting very insecure and needy. I also noticed that he kept going into the "prayer" or "bow" position (forelegs bent at the elbows while the back legs remain straight, a position dogs often adopt when stretching).

We were at the vet's door at the crack of dawn the next day. Apparently these were classic signs of abdominal pain. There were a number of possible causes: Urinary tract infection; stones; pancreatitis, severe gastroenteritis or an abdominal obstruction. To get to the bottom of this meant loads and loads of tests: blood smears, urine analysis, X- rays, ultrasounds and scans before the final diagnosis was made. Jamie had an abdominal obstruction... (OMG!). I remembered warnings about this dreaded disaster from puppy school days when our pups used to chew and swallow everything and anything. It seems Jamie has not outgrown that habit!

The only option was full on surgery.
So Jamie was hospitalised and went under the knife again. The guilty culprit, plucked from his duodenum, proved to be a peach pip.


And if surgery was not bad enough, the vet has insisted that Jamie go on diet!

The poor dog is hoovering my kitchen floor in the hopes of finding the minutest tidbit. How come I feel so cruel, when this is supposed to be in Jamie's best interests? I have become neurotic about letting Jamie out the house. How else can I prevent him putting anything that has not been strictly vetted by yours truly into his mouth, particularly since he acts as if he is starving?

Whenever he looks at me with his "sad eyes" expression, I am not sure if he is feeling sick again or accusing me of dog cruelty.
Forget all the hospital soap operas, I think the stories that go on in vet clinics will make for brilliant TV drama.
(I should know!)
Posted by MA Beagle at 1:14 PM 2 comments: