Help! Held Hostage by a Hadeda... 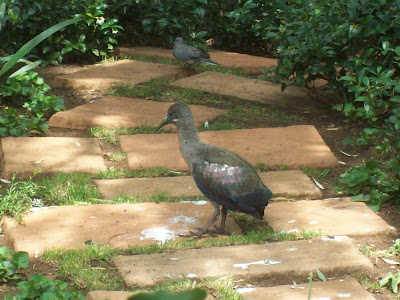 This has happened for the last six years. Whenever it is breeding season, the Hadedas return to one specific tree in my garden and cause havoc. The Hadeda is a large dark brown/gray ibis with glossy greenish purple wings, a long black bill which is uses to eat earthworms, insects, spiders and snails. It has a loud and harsh call, hence the name and is found in Sub Saharan Africa.

The problem is that they build ridiculously tiny and rickety nests hardly able to house one chick let alone more. It is the third chick that is always the problem. As they grow into fledglings, inevitably one falls out before it is able to fly. I always phone Free Me, a bird rescue centre to ask them what to do. Their advice is always the same. Try and replace the chick in the nest or see if the parents will come down and feed it on the ground.

Mission Impossible !
The nest is way too high in the tree and the parents hover uselessly in the branches idiotically unable to work out how to feed the fallen chick.

I have tried my utmost each year to try and save the chick. One year I spent an entire week totally focused on reuniting a chick with its parents. I would put it on my roof in the hopes its parents would come down and feed it. The dumb parents continued to hover around but did nothing useful except keep it company.
Every time I saw the poor chick getting weaker and weaker, I would capture it and feed it mushy dog pellets through a syringe ( advice from Free Me who said if the protein content of the dog food was high this would help nourish the chick ). I'd keep it warm in a box overnight especially as it often rained at night. The next day I would drag out the ladder and return the re-vitalised chick to the roof hoping that the penny would finally drop and its parents would start feeding it themselves.
This continued day after day which was extremely stressful for the chick, its parents and most of all me. Despite my efforts the chick eventually died.

This year it was with relief that I noticed a broken egg on the ground. Only two chicks hatched making the odds of survival better. Unfortunately the second chick died two weeks ago leaving a single chick in the nest. Well, I thought, at least the parents should have no problems raising one offspring and I would have a peaceful November. Oh boy was I wrong!

It's been two days and two nights since the lone chick fell out of the nest into my garden.
Having fallen from Eden onto Earth it was a total innocent, unaware of all the dangers it faced.
The only reason my dogs did not chase it at first was because it was so passive and trusting. But the Hadeda soon learned that dogs are not really friends. The moment it became defensive, my dogs thought game on. 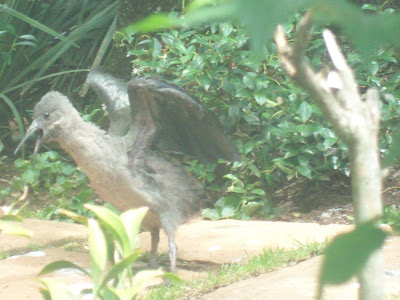 I have decided this time to let nature take its course. What will be, will be.
But in the meantime I have tried to tip the odds in favour of the chick by barricading myself and my dogs in the house. The chick is currently walking around undisturbed in the garden.

Jamie and Jemma are not very happy about this and we are suffering from cabin fever. But I was thrilled this morning to see a parent on the ground with the chick.

Meanwhile all my windows are closed so that Jemma can't do her famous Houdini act and escape outside. I walk around stealthily trying not to bang doors or dishes so as not to frighten the chick. I have even kept curtains strategically closed so the chick will not be startled by our indoor activity.

And so we pray to Mother Nature:
Please keep the chick safe and may it learn to fly very,very,very soon because we are going stir crazy cooped up and afraid to venture out of the house while the Hadeda keeps us under siege.
Posted by MA Beagle at 11:44 AM 4 comments: