Last Hunt of the Season coming up... 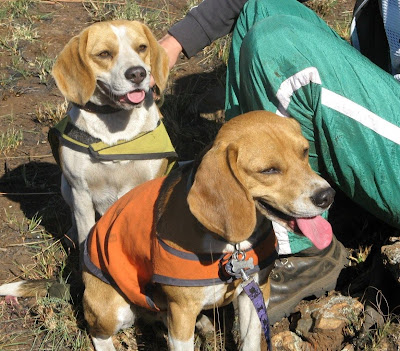 Jamie in yellow (behind) with a friend 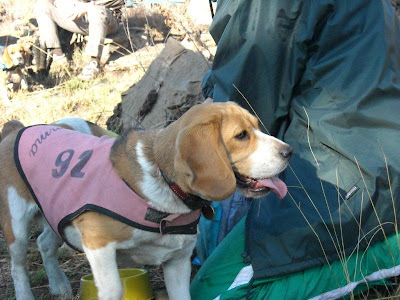 There is only one more hunt of the season on Sunday 12 September. After that we will miss all the fun enormously. I am still stressing about what we are going to do until the new season starts again next winter.

There is a final competition run at the very end on the season for only the most experienced and fastest beagles called "The Top Ten". They follow a 5 to 7 kilometre long trail non stop. Last year only five beagles finished. This is quite an achievement as the normal trail is about 1 kilometre long but the tough terrain adds to the difficulty. We normally do five of these trails back to back but with a break in between each one for water and rest.
Jemma works much harder than Jamie because she completes the trail and then returns to where the owners are waiting at the start. Jamie (oh sly one!) has learnt to stay at the finish of the trail and wait for all the owners to trickle in. Very clever! So he does not work nearly as hard as Jemma.

In October there will be a Beagle Ball attended by owners who (for a change) get all dressed up and have a swell time. People often don't recognise each other when they are decked out in all their finery. We are used to dressing in very unglamourous, thick protective clothing to keep us warm against the early morning cold and looking bleary eyed and blue in the face because of the 5.00am wake up call.
Trophies and prizes get awarded to the top ten beagles who have won the most points for coming in consistently in top places during the season. I also think it is a reward for all those dedicated owners who have given up so many Sunday morning "lie-ins" so that their beagles could have some fun.
Next year I will be entering Jamie and Jemma as a team because I think they will have a good shot at doing well in the team category. But in the meantime I am going to have to work on my fitness training programme with them during summer. My sporty sister has advised me to get them to build endurance by following me at a trot on a bike in the park. On the in between days she suggest we do sprints around the complex. But first I will have to work on my own fitness to follow this strenuous programme!
Posted by MA Beagle at 2:04 PM 2 comments:

The community of owners who take their dogs to the Beagle Hunt is very loose, laid back and there is no pressure to do anything but enjoy watching your dogs run. Most of us don't remember every one's names but we do know the names of the beagles (prominently displayed on their bibs).

The Hunt has a blog which keeps everyone in touch with the latest news, how the last hunt went, photos of our dogs competing and the occasional call for a home for a rescue beagle.
But last week one the most well known beagles on the Hunt, Basil, died in a freak accident.
He was a real character, larger than life both figuratively and literally.

There was a burglary at Basil's home. During the ensuing chaos when the security service arrived on the scene, the gate was left open. Basil ran into the road and was run over.

The outpouring of support by the owners was quite amazing! I had tears running down my cheeks as I read the comments. Why did I react that way?
Perhaps it was because I remembered what it was like to lose my own dogs, perhaps it was repressed grief at the memory.

I think we so seldom acknowledge that losing a pet is something important in our lives, something people genuinely grieve about. It is so often brushed aside because of course there are much bigger and harder issues to deal with in life than the loss of a pet.

But here people were acknowledging a pet owner's loss and grief. Everyone wrote a kind testimonial about Basil and each comment was signed with the owner's name and that of their beagle.
It's nice to belong to a community of people that understands that it's OK to be sad when you lose a pet.
Posted by MA Beagle at 1:35 PM No comments:

Going back to Puppy School without Jamie or Jemma

When I started writing this blog about me and my dogs, I didn't realise that it would take me into a whole new world. Taking Jamie and Jemma to Puppy School opened a door for me that has taken me off into a whole new direction.
I decided I wanted to learn more.

So last year I spent nine months studying canine behaviour through the Centre of Applied Pet Ethology in the UK. I learnt that the more you know, the more you realise how little you know. I learnt that the world of dog behaviour is surprisingly complex. There are many different schools of thought amongst the academics. And when it comes to the business side of things, it is highly policised and competitive just like most other industries.

But perhaps the most important lesson I learnt is that there are two ends to a leash. There's a dog on one end and a human on the other end. Most of the time canine behaviour is the result of how the human behaves and how much the human really understands their dog.

Everything in life always comes back to Homo sapiens, even canine behaviour!

This year I have embarked on my studies to become a dog trainer starting out as a Puppy Instructor trainee. I wrote my exam last weekend and will embark on several months of practical training during which we are constantly evaluated before we are given the green light as a trainer.

It is interesting to observe that the puppies are always so innocent and delightful. The challenge is usually how to help the humans. Luckily it was not so long ago that I was one of those clumsy, fallible and ignorant owners, so I can empathise with most of them. Though there are a few who, shall we say, present an interesting challenge! But that is a story for another time.
Posted by MA Beagle at 3:21 PM No comments: