Canine athlete definitely out of form...

It has been a long month. It seems to have taken forever for Jamie's toe to heal. He has put on weight and lost quite a bit of fitness. So has Jemma.

The big problem has been boredom. There is nothing more trying than an active dog that is bored out of its mind while convalescing. The main tip I was given was to keep Jamie chewing. Overwhelm him with chew toys, rawhide, hooves, stuffed kongs and bones.

Bones are of course the cheapest chew toy but they are also controversial. My vet nearly had a fit when I told her I was giving Jamie and Jemma bones to keep them occupied. Probably because she has seen all too often the end result of splintered bones stuck in the intestines of pets.

Those that are pro bones say that they must be BIG bones like knuckle bones, marrow or femur bones. The moment they start to thin or have raggedy edges, throw them away! Some say you must boil your bones as this reduces the growth of bacteria if your dogs like to bury their bones (Now I just chuck them before they get buried). Others say raw bones are better because they are less likely to splinter. Jamie is an "ingester" (tends to swallow whatever he is chewing) whilst Jemma is satisfied with destroying the object of her desire and then walking away. The main message is - be careful, no matter what you give your dogs to chew.

At our last beagle meet at Walkhaven I had to make excuses for why Jamie was looking a bit tubby. It was of course all those marrow bones and lack of exercise. The "Hunt" season starts this weekend. Too late to get them both fit enough. So they will have to toughen up as they run. (Me too!)
Posted by MA Beagle at 2:40 PM No comments: 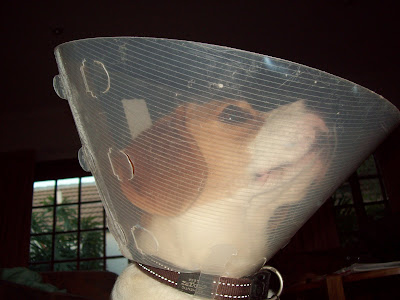 Jamie was very woozy and hopping on three legs when I fetched him late on Friday afternoon at the vet. He had a large, plastic bucket around his head (he looked like a creature from outer space).
The vet said that the operation had gone well. They had removed the nail and the bone underneath it. So part of the last digit on his toe had been amputated. "Amorphous bone growth that had developed on the toe as a result of irritation had also been removed" according to the vet.
List of instructions:
Both Jamie and I felt rather overwhelmed as we returned home. The collar scared Jamie stiff (literally). He refused to move. His leg had been covered with a thick dressing and the vet advised that I could remove the collar so long as he did not chew his dressing. 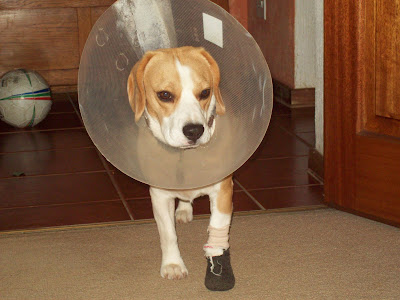 On Friday night and Saturday, Jamie spent most of the day sleeping on the couch. But when I woke up on Sunday, Whoops! Jamie had chewed off all of his dressing and worst of all had probably been licking his wound. So off we rushed to the vet again to have his toe disinfected and a new dressing put on his paw.

Sorry, Jamie but the collar had to go back on. What an awkward piece of apparatus! He has difficulty sleeping. When he feeds I have to make sure the collar fits around his bowl so he can reach his food. I have put water in a wide flat bucket and he drinks by sticking the collar into the water. I can hear his progress around the house by the sounds of banging and scraping as he bumps into doors, furniture, walls. He also vigorously scratches the collar. 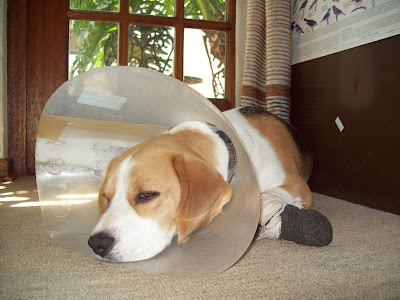 Jemma does not know what to make of this alien looking dog. She has been uncharacteristically quiet. Her usual playmate is now Hop-along-Cassidy in a Space Helmet. I will have to take her for walks on her own and leave Jamie behind (poor boy!).
What ado about a toenail! I keep on wondering if I should have taken Jamie to the vet the first time he stubbed his toe. We might have avoided all this aggravation. So the question is: When is a scratch just a harmless scratch? Should you take your dog to the vet for every little thing just in case it can become serious? Or was this just a case of sheer bad luck?

The good news is that the vet does not believe this operation will affect Jamie's ability to run!
Posted by MA Beagle at 11:54 AM No comments: