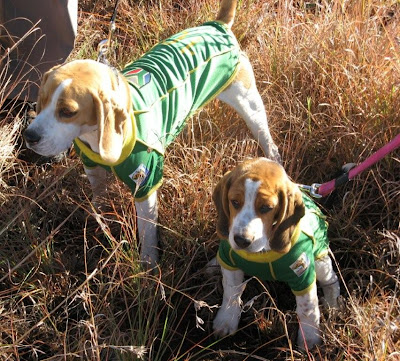 Yup, even our dogs have been affected by Soccer World Cup fevah! These two are keeping warm in their national colours.
Initially the vuvuzela was a huge point of controversy with wide debate about whether it should be banned at the World Cup stadiums. But half way through the tournament they are now an accepted part of the African experience.
I personally attended a Bafana Bafana match with some trepidation and earplugs at the ready. Instead it was an unforgettable experience. There is nothing quite like the vibrating energy generated by thousands of vuvuzelas. As one of of our players put it "We could feel the wind of your lungs supporting us". In fact it is quite liberating to be able to scream invective at the opposition and the referee knowing that no one can really hear what you say. Otherwise I would have been red carded out of the stadium!
So far it has been a Soccer World Cup of upsets and surprises, despair and elation. At first many (including players) complained that the cacophony was undermining their concentration during the game. Strangely, I have not noticed complaints from the winning teams. There is no doubt in my mind that the vuvuzela has added something different and special to this event. Vuvuzelas are fast becoming a South African national sporting symbol and being exported just as fast around the world. Nor can manufacturers meet the demand fast enough (much of which is from foreign fans). Mark my words, the vuvuzela will start appearing in other stadiums around the globe.
I did have a chuckle when I heard that the the white haired dons of Wimbledon have issued an edict banning the vuvuzela from the tournament. Ah well, Wimbledon would not be Wimbledon if it was not restrained and ever so polite.
My attitude has changed about the vuvuzela complainers. Either put up or shut up! This is Africa, get used to it!
Posted by MA Beagle at 4:07 PM 2 comments:

The temperature was sub zero and the veld white with frost. I had to pry my eyes open with pliers at 5.00am in order to hit the road. The round trip to the Beagle Hunt is about 100 kilometers and my motivation about the whole exercise needed a boost. I had become despondent about the fact that Jemma and Jamie had not yet finished a full scent trail. The whole point of the Beagle Hunt is to get them to run really hard with the pack and use their incredible olfactory sense. But so far they had not achieved this. We might as well walk closer to home at a more civilised hour, I grumbled as we drove in the dark trying to avoid the ubiquitous potholes. I needed Jamie and Jemma to finish a scent trail. 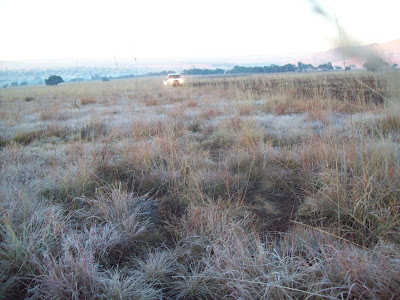 Today they received their new race bibs with their own name and number. Jamie was number 91 and Jemma 92. Now they looked the part, they just needed to act the part. 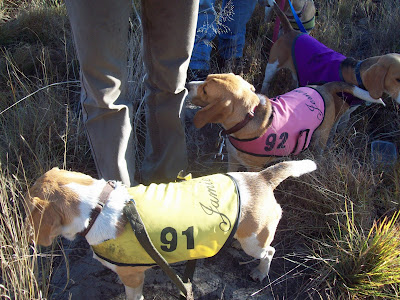 Nothing happened on the first trail. But the second trail of the day was downhill through short grass. I noticed that for the first time Jamie and Jemma were watching the people laying the trail - a good sign that they were aware something was up. As the horn blew, the pack raced off sticking together because they could see each other and disappeared around a koppie. After about five minutes Jemma and Jamie returned with the rest of the beagles. When everyone was accounted for, we walked to the end of the trail where the judges were waiting to read out the list of beagles that had crossed the finish line. Jamie and Jemma had arrived in second place! I thought this was just too good to be true and double checked with the judges that it was not other beagles with the same name that had finished. "Yes," they confirmed " Number 91 and 92 finished well".
Suddenly the effort of getting up that freezing Sunday morning in the dark was all worth it. 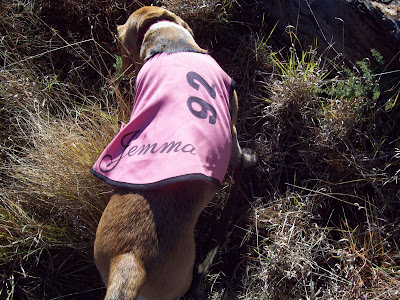 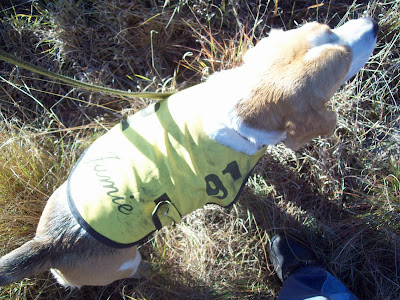 The rest of the trails that day were very tough following a line up and over steep, rocky koppies. Here the pack began to break up and only the most well trained and experienced finished.
So I have realised a couple of things:
Hunting a scent may be instinctive but your beagle still needs to learn how to use that instinct.
Most of the beagles actually just follow the pack or other beagles who know what they are doing.
There are only about 10 to 15 beagles who actually follow the scent and they have learnt this through lots of experience or with the help of training by their owners.
So like everything else, one has to put effort into this sport. Although I had hoped that Jamie and Jemma would do everything naturally while I sat back and drank hot coffee, it is going to take a bit more dedication on my part.

I was chatting to someone who owns a husky and joined a group who go "sledding" i.e. train their huskies to pull a variety of contraptions from go-carts to bicycles. She was also told that this was something her dog would do instinctively. But this was definitely not the case. She said her dog was all over the place so she quit and has returned to walking in the park.

We will see if I can hang in there because there is no doubt Jemma and Jamie love The Hunt.
Posted by MA Beagle at 1:06 PM 1 comment: