It's really humiliating being outsmarted by a dog!

It's amazing what puppies absorb in their first weeks. I remember when visiting Jemma's breeder that in the section allocated to dogs and puppies, there were a few couches on which the adult dogs sat.

It was only when Jemma was about 4 months that she began jumping onto my couches. The only reason she had not done it before was because she was too small. But she remembered her parents doing it and was imitating their behaviour. My problem is that for my sake and that of my visitors, I would prefer one place in my lounge to be safe from dog fur. So couch jumping is out. But how to persuade Jemma of that?
A stern "no" and pointing to the ground had no effect, nor did a shove off the couch have any impact. So it was time to consult dog trainer Wendy Wilson again. "The principle is that when the negative action is against yourself, you "punish" by ignoring your dog. Their negative actions result in you not paying them attention. But if the negative action is against something like a couch (the environment) then the environment must " 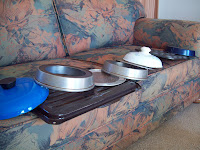 punish" them," explained Wendy.
OK but how does one make the environment "punish" a dog?
She told me to put lots of baking tins, pots and pans on the edge of the couch. When Jemma jumped up, they would make a helluva a racket falling off. Hopefully this would give her a fright and she'd assume the couch had barked at her. Well I tried that, but clever Jemma was suspicious of these obstacles and never made a move.
Now I have three couches. Her solution was to jump onto the other couches. My problem was that I was running out of things to put on the couches. She was even smart enough to see a weak spot in my fortifications. A small opening between the pots and pans allowed h 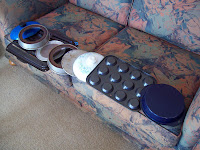 er to jump through. And there she sat behind the fortifications with a self satisfied smirk on her face.
So my next move was to make the pots and pans bang by themselves because she was smart enough to avoid them. So I filled a small tin with stones and lobbed it onto the metal collection. The noise succeeded in getting her off the couch.
But if she has worked out that the pots, pans and the couch are separate things, does this mean that I am going to have to store my kitchen utensils on my couches forever? I'm going to have to go back to Wendy.
It's really humiliating being outsmarted by a dog!
Posted by MA Beagle at 12:22 PM No comments:

Dog's Breath and other nasty things...

I have promised myself that I will get dog hygiene right this time.
But it’s like a New Year resolution: easy to make but hard to keep. 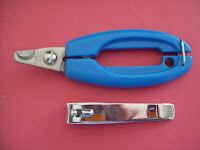 Clipping the nails of my previous beagles used to be very stressful. They hated it. So at the end of their pedicures, I needed something to calm my nerves. The quick of the nail runs two thirds of the way down, so precision is essential. And it's almost impossible not to draw blood while battling to hold a paw. I have to admit I often paid the vet to do it rather than me.

This is why ThinkingPet trainers emphasise getting pups used to having their paws handled. I was advised to use a small set of nail clippers on my puppies before graduating to the larger dog nail clippers. However my first operation was not completely yelp free. I despaired that I was already instilling aversion behaviour despite the fact no blood was spilt. So I nip only a fraction of a millimetre and I do it when they are in sleepy mode. 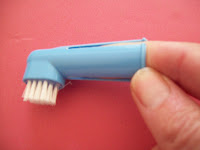 Then there are their teeth.
Plaque builds up over time. But taking them to the vet to have it removed is expensive and they have to be sedated. As my old boy aged, the plaque became as hard as cement and had to be literally chiseled off his teeth. The unfortunate thing was that his teeth then became very sensitive and he could only eat soft mushy food. At the moment I use a dog tooth brush that fits on one’s forefinger. I wiggle it around in the pups' mouths so they get used to the feel. But they think it’s just another great toy to chew. Apparently there is a tooth paste that tastes just like liver and encoura 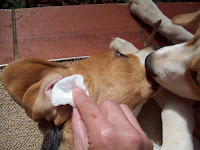 ges dogs to co-operate. We shall see.......
And then there are the ears.
If you have a floppy eared dog, you probably know all about yeast infections. When the climate is damp and the dogs are often in water, eczema and yeast infections are real problems. Jamie is from a dry, high altitude climate and his ears are in good condition but Jemma who is from the coast had "grungy" ears. To cure it, I had to put an ointment in her ears twice a day and clean them out with a special solution. Otherwise she could get a serious infection said the vet sternly.

So good hygiene will save on bills, but it needs a heck of a lot of owner discipline!
Posted by MA Beagle at 10:22 AM No comments: 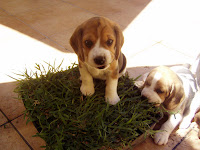 I read in my ThinkingPets manual that it can take up to 8 months to house train your dog. (Groan!)

But I have heard a story about a breeder who trains his pups from day one on roll-out lawn.

It's cheap and disposable. So the breeder hands over a fully house trained pup to a very grateful owner. We don't have to spend months re-training our pup so it does not do its business on tiles, carpets, concrete, newspaper or even in its kennel. Apparently pups learn by recognising the feel of grass.
Jemma's breeder tried it on a small scale, creating grass litter trays for her puppies. But she said it was a hit and miss affair.
I have estimated that one metre of roll-out grass costs as much as one newspaper and is far more durable.
Jemma used the litter tray I made a couple of times.

I am using roll-out grass in the section of my garden that I have allocated to the dogs as their toilet area. It is a temporary solution as I will need to plant shade grass there in summer. This is not going to happen until the pups stop eating/digging/ destroying my garden. But in the meantime they have direct access to grass from the house. The roll-out lawn has lasted a surprisingly long time, at least a month. I am only now considering replacing a few sections.

I would be very interested to know if any breeder has used this idea to begin house training puppies. Roll out that grass idea!
Posted by MA Beagle at 11:30 AM No comments:

Who do ya call? 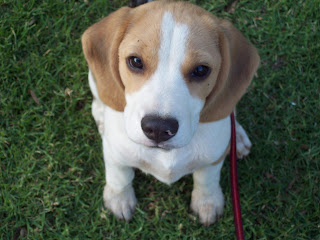 If you've got a problem, post a comment and maybe a kind trainer or animal behaviourist will have the answer.
Posted by MA Beagle at 3:35 PM No comments: