One of our classes had a very small and shy female Maltese Poodle puppy. The first day this little thing just huddled underneath its owner's feet and shivered. It was much smaller than any other puppy in the class. So we encouraged the owner to use Tellington Touch strokes to calm and get her pup used to the new environment, people and other puppies.

The dilemma we faced was where to draw the fine line between molly coddling a puppy but not allowing it to become too overwhelmed and fearful. We observed the puppy became more confident with each class but her owner unwittingly continued to be over protective.

When we felt the dog was showing enough confidence, we asked the owner not to pick up her dog at all for an entire class. She found this incredibly difficult but the little pup actually coped quite well (under the trainer's watchful eye).

It took a lot of persuasion before the Maltese poodle owner eventually stopped picking up her dog during class and allowed her to stand on her own four feet. We explained that by being over protective, she was sending a message to her dog that fearful behaviour was an acceptable way to deal with the world. Her puppy would never learn self confidence this way. In fact what the owner was doing was counter productive. She was not helping her dog become more socialised, less fearful and better able to deal with what it would encounter in future. She had to learn to let go.

During the course this puppy finally reached a stage where it ran around and engaged with other people and puppies.

While doing some research, I came across an article about the "Small Dog Syndrome".

Behavioural problems arise in small dogs when owners, because of the dog's cute little size, allow them to get away with murder! The rule of thumb is that little dogs should not be allowed to behave in a way that one would not accept from any other dog. If you do allow this, it is likely to have a negative effect on the temperament and behaviour of the dog. All dogs should be treated as equals no matter what their size! 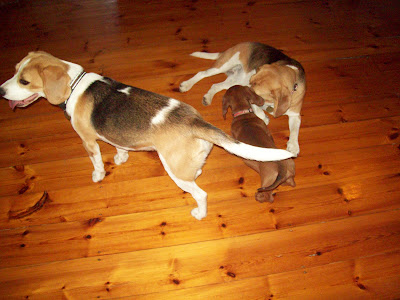 There are many small dogs who do not realise that they are small. I remember encountering a miniature Dachshund puppy at a Bed & Breakfast I was staying at on my travels. This little thing fitted into the scoop of my hands and was dwarfed by my beagles. But it had absolutely no fear at all and interacted with my dogs as an equal.
Hmmm.... wonder if he is ruling the B&B now!
Posted by MA Beagle at 10:39 AM No comments:

Way to go Jamie and Jemma!

Jamie and Jemma came 21st and 24th out of 50 Beagles according to this year's Beagle Hunt results!

Not bad for "newbeags" who actually only starting finishing scent trails two months into the Hunt's season when they finally understood what to do. We also missed half a month when we were away. So they accumulated their points during 3.5 months out of 6 months. Yup, I'm proud of them!

Last weekend we had a beagle social at Walkhaven ( a park devoted specifically to dogs). The idea is for the beagles to continue to socialise with each other off season. This means that when the new Hunt season starts next winter, the dogs will be thoroughly familiar with each other and this will give the pack cohesion.

There were about 16 beagles there and they had a ball. So we will continue to meet up a least once a month to stay in touch. Nice also for the owners to re-connect and catch up.
Posted by MA Beagle at 2:22 PM No comments:

Ever since my puppies jumped through a burglar proofed window into the bedroom, dragged medication from the side table and scattered tablets all over the garden, I have been vigilant.

I always keep medication locked away in a cupboard and keep the door closed. The windows are kept slightly ajar, never fully open.

The other day, I renewed the prescription. I returned home and placed everything on the bedroom side table reminding myself to put it away as soon as possible. I closed the bedroom door.

It had been a tiring day and I ended up dozing off on my couch only to be woken at about 5.30pm by the ringing telephone. I staggered up in a dazed state to find medication pills scattered all over the carpet.

Jamie and Jemma had chewed three different containers of medicine!

Trying to keep my dogs at bay, I desperately counted every single pill. I had to find out how many were missing.

I established that 3.5 sleeping pills had disappeared. But had they been swallowed by Jamie or Jemma? Neither of them were showing any side effects yet so I decided to feed them at 6.10pm.
Then Jamie began acting strangely almost as if he was hallucinating. Tail between his legs, he began barking at a piece of plastic on the carpet and then at the pink glitter on my sandals and non-existent things in the garden.

By 6.15pm I was on the phone to the vet. They wanted to know details about the make, dosage and ingredients of the pills. Well Jamie or Jemma had destroyed the box. So I had to scrabble through my cupboard to find an old box. Then scrabble through my handbag to find glasses because the print was too small to read.

In the middle of all of this, I was trying to corner Jamie so that I could observe him and describe his symptoms the the veterinary nurse. Thank goodness because I observed him vomiting up his supper and hopefully some of the drug. The nurse said she would consult a vet and get back to me.

When the vet called back, I went through the whole story again. I remember her saying that it takes 40 minutes for a drug to be absorbed and that it was a good sign that Jamie had vomited. She would research the drug and the dosage I assumed he had swallowed. If she felt the situation was dangerous, she would phone me back to bring him in. But if she did not get back to me that meant I was not to worry. In the meantime I was to keep an eye on him.

So what was I supposed to look out for? Well the drug would affect his central nervous system so if he continued vomiting, had diarrhea, became drowsy and disorientated - that meant trouble.

Well, I sat on the edge of my seat waiting for the vet to phone but she did not call back.

Jamie appeared OK for the rest of the evening, but I did check him several times during the night to make sure he was still breathing!

I also discovered that not only had I forgotten to put the drugs away in my cupboard but I had forgotten to close my bedroom door. When I eventually returned the phone call that had woke me up, I had to do quite a bit of explaining.

The moral of the story - If you suffer from short term memory loss, do everything important immediately and make lists all the time. And you can never stop dog proofing your house no matter how old your dogs!
Posted by MA Beagle at 1:14 PM No comments:

My attack of Separation Anxiety!

I went to the Berg for a week to celebrate a family event. Unfortunately (like so many places) we were all booked into a non pet-friendly place. I was faced with a dilemma. What was I going to do with my babies for a week?

I did have the option of sending them to a great kennel, but finally decided on a house sitter who would stay overnight and with whom they were very familiar. But she worked during the day. So Jamie and Jemma were going to be home alone for a whole week (at least from 6.30am to 5.30pm).

I remember going on a hike in the Berg (beautiful!) and suddenly having a panic attack about my dogs. What if something went wrong! What if there was an emergency and they had to be rushed to the vet! What if my house sitter discovered this too late! Who would I call to get my dog to a vet asap!

I suddenly realised that I was working myself up into a crazy, negative state over something that might never happen. I spent the rest of the walk thinking positive thoughts about my dogs and trying to calm myself.

When I returned home, all was absolutely fine. My house sitter said that Jamie and Jemma had behaved well (except for stealing her underwear). They seemed none the worse for our week long separation. They say dogs have no concept of time (but I am not sure if that is a proven fact).

But what a relief to know that we can all survive being separated!
Posted by MA Beagle at 11:57 AM No comments: