A Wonderful Story Told Without Words

The German tourist jumped in and saved the dog.

Upon getting back up on the bridge he checked the dog out and told the owner that, "Zer dog is Ok, and vill be fine."

She asked if he was a vet?

Courtesy: http://schnauzerandschnauzer.blogspot.com
Posted by MA Beagle at 5:11 PM No comments:

Wounded in the line of Dog Duty...

I remember our canine behaviour lecturer saying that if one wants to work with dogs, a tetanus vaccination is a prerequisite. I found out why this weekend.

I am now learning how to work with adolescent and adult dogs - a whole different ball game from puppies. In these adult classes one gets a real mix of dogs from different backgrounds. Some dogs are well socialised (often owners who attended puppy classes and want to continue keeping their dogs stimulated and challenged through training).
Then there are those dogs that have not been socialised and have now become troublesome teenagers, so their owners want to "fix" the dog's bad behaviour. (Why oh why doesn't everyone who gets a puppy go to puppy socialisation classes? It would save them and their dogs so many headaches.) And finally there are the adopted or rescue dogs who often have problems but little is know about their past. Betty was one such dog.

She was a small mixed breed (with a bit of Staffie) who barked madly and rushed furiously at every dog in the class with bared teeth. During training, my hand accidentally had an encounter with Betty's teeth. It was not deliberate on Betty's part. It was my body part that got in the way. The bite was minor and after applying a plaster, I decided to tackle Betty's problem again.

Betty was obviously in a state of stress. She was interpreting her environment especially the other dogs as a hazard and her natural reaction was to go into hazard avoidance mode. Dogs can choose either to flee, freeze, faint, fidget or fight. Well, Betty was on a leash in a situation she could not escape, so she chose to fight. What appeared as aggression towards other dogs was, in my opinion, Betty actually saying "Hey! I am afraid of you other dogs, so don't come near me or else!!".

Other physical signs of stress are tension in body posture, staring eyes, a tight muzzle, uneven fast panting, lip licking, whining, a very dry mouth or excessive salivating, cold paws and a sudden outbreak of dandruff on the dog's fur. Betty had many of these symptoms.

When a dog is stressed its ability to learn is considerably reduced. So both Betty and her owner were getting extremely frustrated because she was in fear mode and not able to learn anything.

We decided to try some of the basic touches from a method known as Tellington Touch. This works like magic when one wants to calm and build confidence in animals! We used long, gentle, calming strokes along Betty's body, around her hind quarters, tail and her ears where she held tension. We also used touch as a way of praising her because stress often causes a loss of appetite. As a result food no longer works as a motivator or a reward. Every time Betty stopped barking at the other dogs, she got praise the moment she made eye contact with her owner. Focusing on her owner and not the other dogs was the behaviour that was being reinforced.
We then repeated exercises she could easily do like sit, paw and spin and lavishly praised her each time she succeeded. This meant Betty experienced some sense of achievement during the class.

My personal feeling was that the fact that she'd become calmer towards the end of the class was the most important achievement of all. The fact that she was not learning more new tricks like the rest of dogs, was less important. Betty needs to become less stressed and more at ease when exposed to other dogs, people and different situations. Her owners will need a lot of patience to help her achieve this. Hopefully they will hang in there and not give up on Betty.

I was going to ignore the bite. After all it wasn't serious. But since I had never had a tetanus vaccination, one of the instructors advised me not to take any chances. Oh well, if I was going to be working with dogs, it had to be done. So at five o'clock on a Saturday afternoon I schlepped off to the Emergency room of the nearest hospital. Since my case was coded green ( not critical) I had a long wait ahead of me. Whilst sitting in my cubicle I heard some strange stories emanating from the other cubicles. A man fixing his car had dropped the engine on his thumb thoroughly mashing it in the process. In another cubicle a patient was complaining that his gonorrhea symptoms were getting worse...

One and a half hours later, the attending doctor scared the daylights out of me when he began talking about rabies shots ( a series of three) as well as a tetanus shot and antibiotics (A young girl had recently died of rabies and her palm had merely been grazed by the dog).
I assured him that the dog that bit me had been vaccinated and there was no rabies in the area. I would come back for antibiotics if the bite was showing any signs of infection. So we settled on a tetanus vaccination and dressing my hand with antibiotic cream.

The injection was painless, the bite out of my wallet hurt much more.
But hopefully it will be an insurance policy against any pain and aggravation later on.
Posted by MA Beagle at 12:40 PM 2 comments:

Beagle in the Bag... 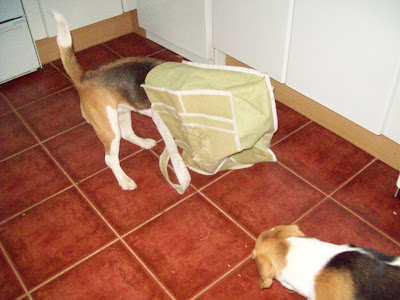 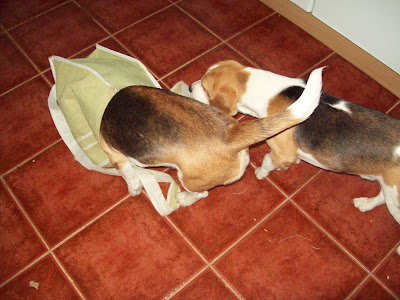 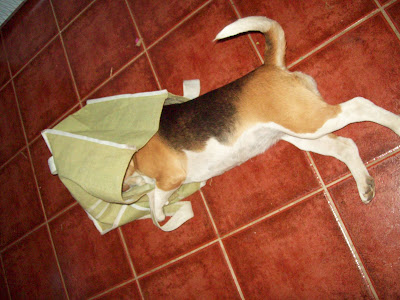