Top Ten beagles battle it out...

So the big day arrived for the Top Ten Beagle Battle. The sky was clear and a keen wind kept the temperature low (ideal for running ultra distances). Champagne was being served to nervous owners who secretly had high expectations of their dogs. I was advised not to fuss as this might throw Jamie off his game (not too difficult when one is not quite awake at the crack of dawn on a Sunday). 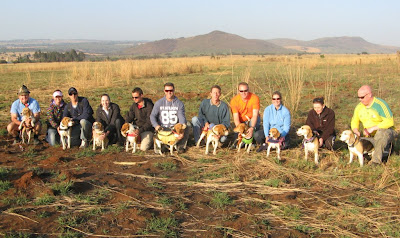 The challenge of this race was that it was ultra long - almost five kilometers. Normally we lay five trails each about a kilometer long. We used a quad bike which dragged the lure (a bag of mackerel) behind it to lay the scent trail. This is a quicker method than our usual method which is on foot. This is to prevent the evaporation of the scent in the rising heat. 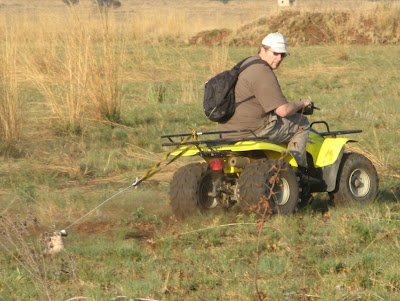 After about a half hour, we were given the all clear to line up our dogs at the starting line.
It was strange only having 10 dogs in the pack but when the horn sounded, the start was as chaotic as usual as the dogs sprinted off at full speed. Check out Jamie in the bib marked 91! 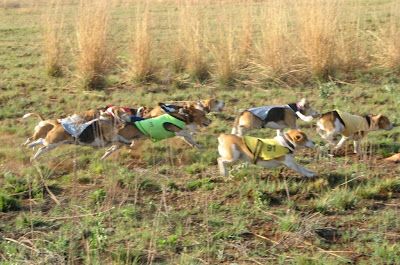 This time we were able to track most of their progress across the valley and up the koppies. Those owners with field glasses kept up a running commentary.
The dogs stayed together pretty much for two thirds of the race with the lead changing a couple of times. Then they suddenly lost the scent. Some picked up the scent again but unfortunately began back tracking on the trail, to a chorus of moans and groans from the waiting owners.

A couple of dogs decided not to back track but since they could not pick up the trail, headed as the crow flies back to the owners instead of the finish line. One of them was Jamie.

Only two dogs were left on the trail now - two girls. It looked like it was going to be a repeat of last year's race where only two dogs finished and they were also female (usually the minority sex in the Top Ten). This year it seemed that yet again the girls were showing their stamina and tracking skills.

Unfortunately one of the girls who crossed the finishing line was disqualified for not finishing the final loop of the trail. So the only finisher and this year's winner was Marmalade.

Her owner happens to be the hunt master who was jubilant because this was the first time Marmalade had made the Top Ten. His comment was "because I lay the trail, I worry whether my dog is only following me and not the scent, but she has really proven that she knows what she is doing."

We celebrated with a slap up English breakfast and champagne! 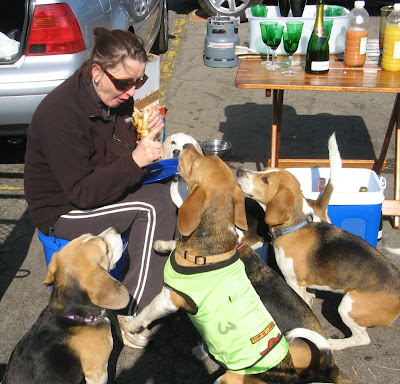 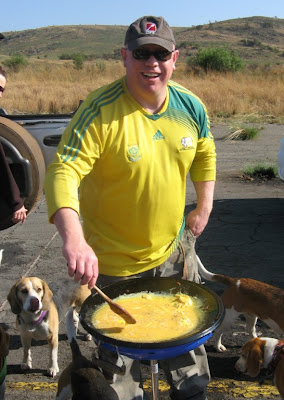 I am really proud of Jamie from climbing up the rankings from 21st out of 50 last year to Top Ten this year. However the lesson to be learnt from the girls is that sometimes the underdog who can't keep up with the leader of the pack, really learns how to follow a scent and keep focused.


(Note to self: Must speak to Santacruzrulz about borrowing a bike; Find out if I can still ride one; Get fit to keep up with beagles.)

All will be revealed when the final results of all the different categories are presented at the Beagle Ball in October.
Posted by MA Beagle at 3:30 PM No comments:

Canine athlete Jamie has made the Top Ten! 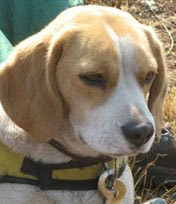 I nearly fell off my chair today when I received a call from the Beagle Scent Trail/Hunt organiser informing me that Jamie has made it into the category of Top Ten beagles of the 2011 Hunt Season. What an achievement for my boy!


He will be racing in the final on September 25 against the other nine dogs to determine who is the overall winner. This time instead of breaking up the trail into 5 sections, they will be laying out one long trail of between 5-6 kilometres. This is a real test of endurance and ability to truly follow a scent. Many dogs just follow the call of the pack and last year only two dogs out of the Top Ten actually finished the trail.

All credit for Jamie's achievement lies totally with him. He achieved his success with very little support from me.

I know that I did not exercise both him and his sister Jemma enough to get them into tip top peak form. I have not kept my dogs mean and lean. A fellow owner who is a vet has chastised me for the fact that Jamie is a bit overweight. He also started the season after being "bed ridden" for a month after the amputation of his toe. He has had to overcome his fear of the car and motion sickness every time we travelled to the hunt. The only thing I did was to be Jamie and Jemma's taxi driver to the "hunt" venue.

Secondly I have begun experimenting with a new diet this week, not a good time to play around with Jamie's nutrition if he is to compete in the final soon. I will have to get my butt into gear and give him plenty of exercise to get a last burst of training in before the big moment. 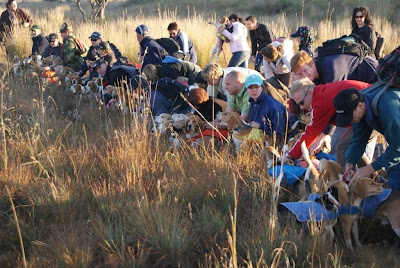 We had a huge amount of people and at least 40 dogs pitch for the last scent trial of the season. This was a surprise to the organisers considering the number of avid ruby fans in the group who were itching to get back to watch South Africa play Wales in their first match of the Rugby World Cup in New Zealand. We normally finish the "hunt" at 10.30am after five trials but the rugby game started at 10:20am! So we were given strict instructions that there would be no loitering or lounging about that morning... 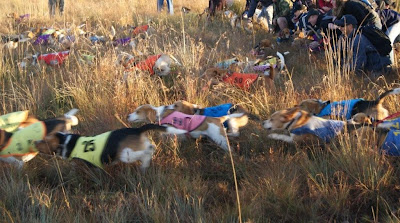 It is bitter sweet when the season ends. I will not miss getting up at 5.00am in the freezing dark or the precarious pot hole ridden drive into the bush in my long slung city car. Jamie still gets car sick and still hates the car so the drive is just as hairy for him. But once we get there, Jamie and Jemma are in their element. They adore chasing the ever elusive scent of the mackerel fish trail through the bush veld and the camaraderie of their fellow beagles.

I love having a morning out of the city and seeing the sun rise outdoors (I'm usually fast asleep in bed at that time). It gives me a great sense of satisfaction to hear my dogs' names called out when they cross the finish line of each scent trail.

It has been wonderful to find an activity so vitally important to the welfare of my dogs who live in the boring suburbia of a city. I also worry about what I'm going to do with them in the summer months. Maybe I should look at agility work which I think Jemma will be very good at doing. But I don't think Jamie will take kindly to going through tunnels of any sort, something he refused to do even as a puppy.

Now the results are in and are being calculated. In two weeks time the top 10 beagles will be named (those with the highest points accumulated over the season). This is a huge achievement and a final race is held in September for these dogs to determine who is the overall winner.

Finally, in October, we will be holding a Beagle Ball. This is for the owners only where we all get dressed up to the nines for general prize giving. It is common occurrence that owners do not recognise each other as on "hunt" days we are usually bleary eyed, muffled in beanies, layers of our oldest clothing and covered in dust and soot from the bush veld fires that burn in the area where we "hunt".

There are awards for the best male or female team, the best mixed team, the most consistent dog of the season (not necessarily a winner), and a pret-a-porter prize for the beagle with the most pimped up race bib. Some owners go to extraordinary lengths to create unusual race bibs for their dogs. The only criteria is that it must show the dog's name and number clearly so it can be identified.

So now we wait anxiously to see if Jamie and Jemma have improved since last year and climbed the seeding ladder ...
Posted by MA Beagle at 12:50 PM 1 comment:

Dogs and their Best Friends! 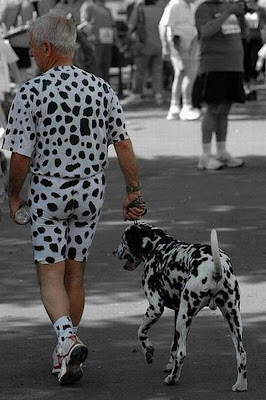 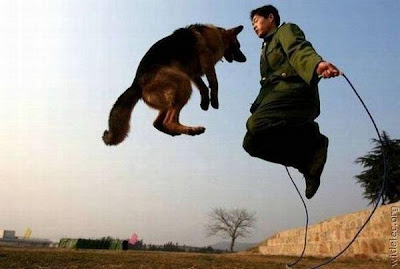 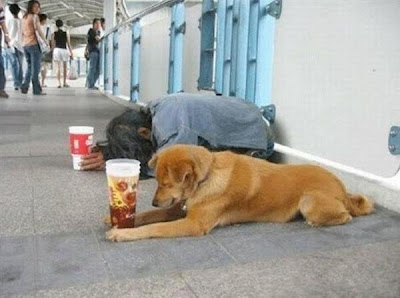 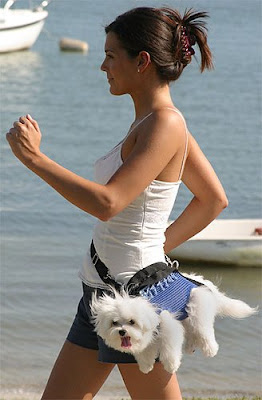