The Retriever versus the Cyclist...

I enjoy walking in our local park which is full of trees and water. Come late afternoon it is filled with people walking, children playing, joggers, cyclists and dogs.

Observing the goings on can be very amusing. Having cycled in the past, I know there is nothing that can ruin an enjoyable ride faster than a puncture. What a schlep to fix it! I came across a rather grumpy cyclist on the side of the path with his bike upended in the process of repairing a puncture.

Suddenly a Irish Red Setter dog rushed up to the cyclist and grabbed something lying on the ground next to him. The cyclist immediately got into a fluster and started chasing the Setter around in circles. The Setter was obviously having the time of his life, not so the cyclist. 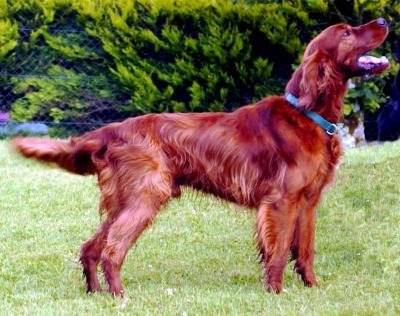 The Irish Setter is bred to be an all purpose hunting dog, both a pointer and retriever. They are especially good at hunting game birds. But this dog had obviously not being taught to return what he retrieves. Eventually the cyclist gave up the chase and arms akimbo waited with a scowl for the very embarrassed owner who rushed up chastising her dog.

Even she battled to retrieve the unknown object. Eventually it was revealed that the Setter had stolen a very expensive pair of cycling sunglasses. Luckily, being a retriever, this breed usually has a soft mouth, so the sunglasses were undamaged just a bit gob smacked.

But the final straw for the hapless cyclist was when another cyclist flew past on his bike and shouted out " Having a bad day mate?!?"

Moral of the story: Retrievers will retrieve. Just teach them to return items before they are labelled kleptomaniacs.
Posted by MA Beagle at 1:19 PM 1 comment:

Dog Colonisation of the Couch...

In October last year, I wrote that I had finally given up an 18 month battle between me and my beagles over the kingdom of the couch. No matter what I did, nothing could persuade them that the floor was better than a couch.

Behaviourist, Karin Landsberg suggested a truce: one couch (covered) would be allocated to them and the other couch would be mine. One year later we pretty much have reached an understanding. At least I can see that when they venture onto my couch, they look a little bit guilty about encroaching on my territory. A firm word or two (or three) usually rearranges the seating arrangement.

At the recent Beagle Ball, the problem of the colonisation of the coach by dogs came up in conversation and I was surprised to hear a number of owners admit sheepishly or quite openly that they shared couches or chairs with their dogs. Ahem! I was not the only one who had succumbed to colonisation!

However, I have not imposed this rule on visitors. Hasty arrangements are made to ensure my furniture is fur free and the dogs are unceremoniously spirited out of the living room.

But perhaps my most satisfying observation were the pictures sent to me by my beloved brother.
He is not wholly in favour of dogs living inside the house and gets particularly irritated with one of their dogs who profusely sheds white hair all over their home. He has made it very clear that human homes and kennels are two completely separate entities. 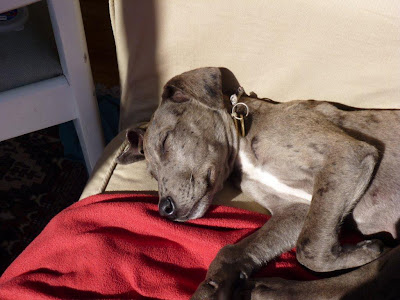 But his family has recently acquired a puppy which is a Labrador/Great Dane cross and they have all fallen in love with this pup. 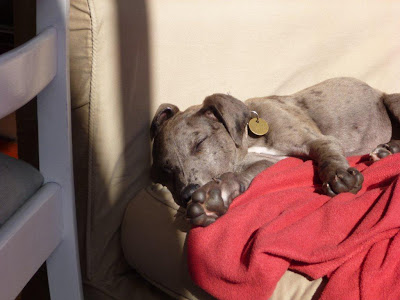 Then I looked more closely at the photos. Rather suspiciously, it looked as if their new pup was sleeping on a couch or a chair of sorts.
Look closely. Is that not the seam of a soft cushion and a comfortable back rest? Is not the colour cream? I have not seen any dog basket that looks quite like this nor is cream the usual practical choice of colour. 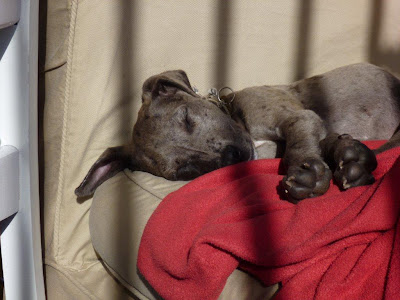 Fellow readers, what do you think? Has my brother gone over to the other side? Has this puppy stolen his heart and as a result he has lost his head?
Study the evidence carefully. Your opinion would be most interesting!
Posted by MA Beagle at 12:18 PM 1 comment:

Canine athlete Jamie is my Champ...

Well, the Beagle Ball was a night of surprises (for me at least, probably not for my beagles who knew how hard they had worked this Drag "Hunting" season).

I came home with six certificates and two trophies plus bags of dog food and lots of goodies for both me and Jamie and Jemma.
I must admit that I had trouble not falling over whilst carrying everything back to my car in my stiletto heels (and no, it had nothing to do with anything imbibed!). 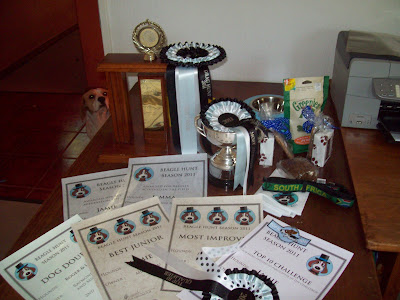 But first, congratulations to my little girl Jemma who did very well in improving her ranking from 24th last year to 19th this year. She is way too clever and when she gets tired, she just takes the short cut home. She, unlike Jamie, will always return to the waiting owners thus running almost double the distance.

Jamie just hangs around at the end socialising with the team checking which beagles reach the finish line. Jemma also has a habit, since she is usually in the middle of the bunch, of turning around just before the finish and joining the front runners who are already returning to their owners.

The only way to correct this is to "walk the line" as we say. This means making sure Jemma sees me leaving her behind as I walk up front with the team laying the trail. This technique usually ensures that Jemma actually crosses the line to find me. But it's not always that easy because one has to be very fit to keep up with the hunt master who sets a cracking pace and I have to find people with hands to spare to release both my beagles. 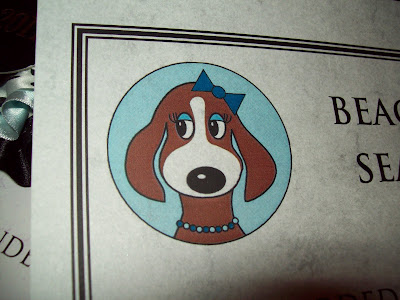 Jamie received a certificate purely for the honour of being amongst the Top Ten beagles and a logo which I must embroider onto his bib to show off his status next season. Then came the drum roll for the announcement of the exact positions of the top ten beagles. As the numbers were called out, I was delighted that Jamie was placed 6th overall, just behind five of the top beagles who have dominated the past couple of seasons.

When it came to the Double Dog teams (two males) Jamie was teamed up with the amazing Roger who was the Top Beagle of the year. They achieved a second position in this category. 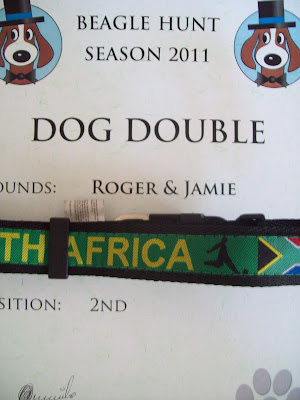 I sat back thinking the excitement was over, but there were more surprises in store for Jamie and Jemma's rather befuddled owner. There is a trophy for the Most Improved Beagle since the previous season. Jamie's rise from 21st to 6th position this year earned him this fabulous accolade. 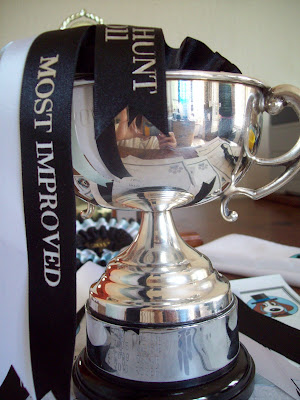 And it was not over yet. There are categories for the Best Junior Beagle, Best Adult Beagle and Best Veteran Beagle. Lo and behold Jamie's name was called out as Best Junior Beagle of the year! Well done my boy because my contribution was only that of taxi driver to the "hunts". Jamie achieved this all on his own. 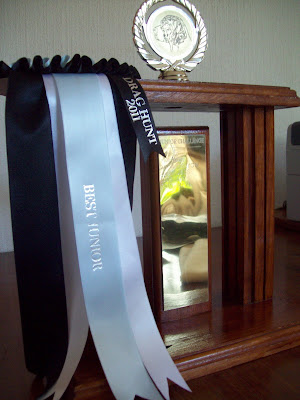 Of course, Jamie is not sure what the fuss is all about and what these strange looking objects mean. He is blissfully unaware of his achievements only that he had a heck of a lot of fun achieving them! 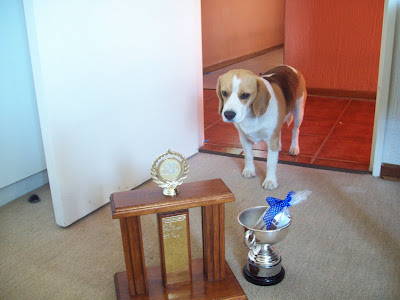 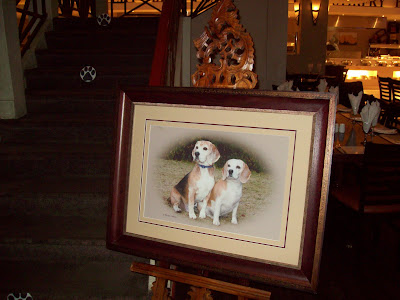 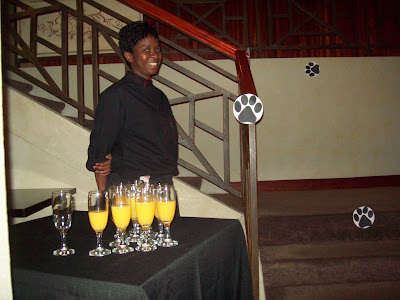 It was not difficult finding ones way to the restaurant where we held our Beagle Ball. Paw print tokens led the way up the stairs where we were greeted with a glass of champagne. 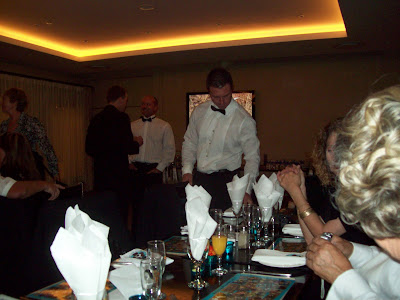 The owners really cleaned up nicely for the formal dress code and I finally got to learn the names of some of the owners whose dogs I knew so well. 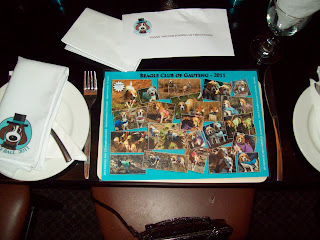 There were some really nice touches to the evening where someone had embroidered beagle logos on our white napkins and our place mat was a laminated montage of pictures of our beagles.There were tons of prizes and tons of goodies bags 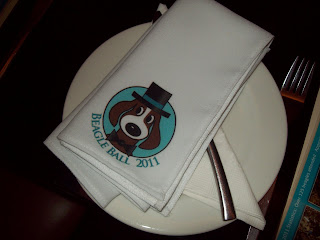 to be given away.

There were so many prizes: best new comer of the season, best achievement at a single hunt, best bib (the pret-a-porter prize), most valued dog (not necessarily the best), best mixed team, best bitch team, best male team, best female and reserve female (second prize) and the same for the males, best junior beagle, best adult beagle, best veteran beagle and the winner of the Top Ten race. 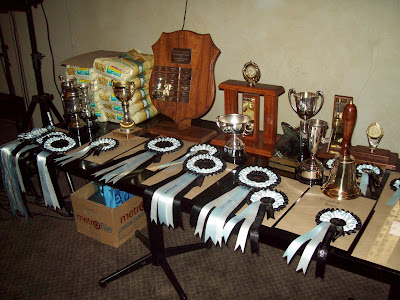 The ultimate prize, Top Beagle in Gauteng, goes to the beagle who has accumulated the most points during the season. This prestigious prize went to Roger who has been in the top ten for three seasons and has finally cracked the number one spot. (He was also Jamie's partner in the Dog Double. But more about the outcome of that partnership in my next blog)

No-one went home empty handed that evening and can you believe it, besides eating and drinking sumptuously, most of the time we talked about people and their dogs!
What a great community of laid back, friendly people!

More news about my dogs' achievements in the next blog.